Just over the foothills north of the Treasure Valley lies beautiful Emmett, Idaho.  At the base of Squaw Butte with the Payette River flowing through it, Emmett has abundant recreational opportunities year-round and yet is a throwback to simpler times.  It is an unabashedly small town with everything you need tucked within the valley.  There are good restaurants, a great hospital, good schools and most of all, friendly people.

Living in Emmett allows your children the freedom of walking and biking to schools and parks.   It is a safe and ideal place for raising kids.  The weather is mild and shopping or entertainment is within a 20-minute drive.

GEM COUNTY Nestled in the southeastern corner of the beautiful state of Idaho, Gem County is a diverse region with many unique attributes. Since its establishment on March 15, 1915, Gem County has evolved to become a vibrant area home to significant economic, cultural, and tourist activity. From sprawling fields rich with the bounty of the land to quaint communities like Emmett, Letha, and Ola, Gem County has plenty to offer its visitors and residents.

A YEAR-ROUND COMMUNITY Numerous events throughout the year celebrate the inherent beauty of our local area, with the Emmett Cherry Festival and Harvest Festival and Street Fair serving to highlight the agricultural activity that occurs across Gem County. The small town feel of our local communities resonates throughout the businesses and residents who make Gem County truly special. Don’t let our small size fool you, however. Our close proximity to Boise and convenient position on the banks of the Payette River has helped make Gem County a veritable agricultural powerhouse at the very heart of Idaho.
From fruit orchards to manufacturing facilities, business developments continue to grow and succeed in Gem County. The impact of these businesses can be felt near and wide, with our local producers exporting their products across the nation. We’re also proud to serve as home to countless small businesses and entrepreneurs. Service-based businesses, retailers and niche boutiques, and nonprofits number among the many organizations who have chosen to do business in this part of the state.

Rising some 5,906 feet (1,800 m) above sea level, Squaw Butte, named by Native Americans who used this area as their winter resort, stands at the north end of the valley. The Payette River was named after Francois Payette, a fur trader from Quebec who was put in charge of old Fort Boise in 1818 and traveled through the area. Permanent settlement began in the early 1860's, after gold discoveries in the Boise Basin brought people over the established stage and pack train routes. Two of these trails joined at the Payette River north of the present river bridge in Emmett.
Originally called “Emmettville,” it was primarily a post office named after Emmett Cahalan, the son of Tom Cahalan, an early settler of the area. The post office was later moved but retained the name. A few years later the “ville” was dropped and the post office and town became simply Emmett. In 1883 James Wardwell had the town platted, and in 1900 the town was incorporated as Emmett. Later, in March 1902, the Idaho Northern railroad came to the valley.
After the closing of the mines in 1906, the power lines were extended to Emmett. A series of irrigation projects made it possible for more rapid expansion of the town as the major service center for a farming and fruit-growing valley. In the early 1900s fruit packers adopted the label of “Gem of Plenty” because of the fertility of the valley. During the mining era the valley was known as the “garden” for the mining regions. 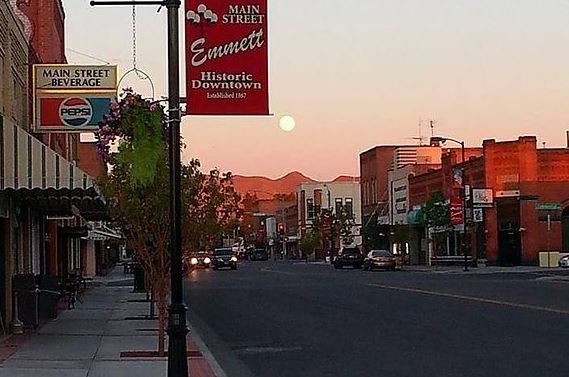